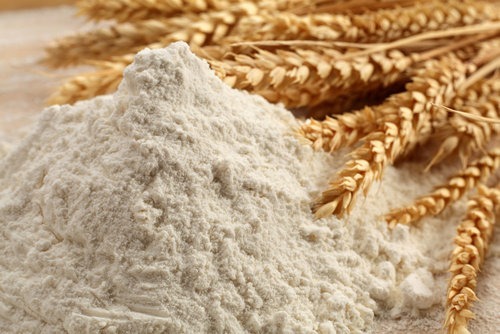 Vital wheat gluten is flour that has little starch content and high gluten content instead. Wheat flour is hydrated to remove all starch granules then dehydrated to separate the gluten from the mass. To obtain vital wheat gluten, the insoluble elastic mass is then hydrated again to activate the gluten. Gluten is the main protein in wheat and is a popular choice in the vegan community. Due to its chewy texture, it resembles the texture of meat and is often used to make mock meat and other meat substitute products.

Vital wheat gluten is made from wheat flour. The wheat flour is then kneaded under water to agglomerating the gluten into an elastic mass. The elastic mass is collected by centrifugation. After which, the gluten mass undergoes screw process to remove moisture. Up to 65% of the moisture is removed in this process. The gluten is then dried at an elevated temperature to obtain powdered form of gluten. The final product contains only about 7% of moisture and is sieved and milled to obtain refined form of vital wheat gluten.

Vital wheat gluten is mainly used in the food industry. Due to its chewy texture and protein content, it is used to make into mock meat and other meat substitutes. Vital wheat gluten is also usually incorporated into making of bread and pastry. This increases the baked goods’ ability to increase in volume and improve the chewiness and structural stability.