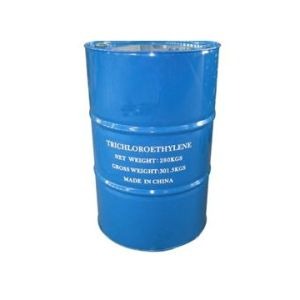 Trichloroethylene, also known as TCE, is a halocarbon commonly used as an industrial solvent. It appears as a clear liquid with a sweet scent. It is a volatile organic compound and is non-flammable. Breathing small amounts of TCE can lead to eye and throat irritation, headaches and dizziness. In the long run, it leads to chronic nervous system, kidney and liver damage.

Most trichloroethylene is produced from ethylene. First, chlorination of ethylene takes place over a ferric chloride catalyst to produce 1,2-dichloroethane.

1,2-dichloroethane is subsequently heated to around 400°C with chlorine where trichloroethylene is produced.

There are several kinds of catalyst that can be used in this reaction such as a mixture of potassium chloride and aluminium chloride. Tetrachloroethylene and trichloroethylene is then separated by distillation.

Trichloroethylene (TCE) is used as a solvent and degreaser and is a common ingredient in many household products like paints, adhesives and spot removers.

Trichloroethylene is used in several food industry processes such as vegetable oil extraction from plant materials, decaffeination of coffee and preparation of flavouring extracts from spices.

It is used as a reactant to produce other chemicals such as refrigerant, HFC-134a.