Formaldehyde, with a molecular formula HCHO, is an organic compound and the simplest aldehyde. It is a colourless, highly flammable gas with a pungent odour. Formaldehyde is a reactive substance and can react with many polymerizers and substances easily. However, due to its volatility and toxicity, it has negative effects on human health. Formaldehyde is readily soluble in water and is commonly distributed as a 37% solution in water. Formalin, a 10% solution of formaldehyde in water, is used as a disinfectant and to preserve biological specimens. Environmentally, formaldehyde may be found in the atmosphere, smoke from fires, automobile exhaust and cigarette smoke. Small amounts are produced during normal metabolic processes in most organisms, including humans.

Formaldehyde has been produced commercially since 1889 by the catalytic oxidation of methanol. Various specific methods were used in the past, but only two are widely used now.

(i) Partial oxidation and dehydrogenation with air in the presence of silver crystals, steam and excess methanol at 680-720Ãƒâ€¹Ã…Â¡C and at atmospheric pressure (also called the BASF process; methanol conversion is 97-98%).

(ii) Partial oxidation and dehydrogenation with air in the presence of crystalline silver or silver gauze, steam and excess methanol at 600-650Ãƒâ€¹Ã…Â¡C (primary conversion of methanol is 77-87%). The conversion is completed by distilling the product and recycling the unreacted methanol. Carbon monoxide, carbon dioxide, methyl formate and formic acid are the by-products.

Methanol is oxidized with excess air in the presence of a modified iron-molybdenum-vanadium oxide catalyst at 250-400Ãƒâ€¹Ã…Â¡C and atmospheric pressure (methanol conversion, 98-99%). By-products are carbon monoxide, dimethyl ether and small amounts of carbon dioxide and formic acid.

Formaldehyde is an important chemical used widely in the home include building materials, smoking, household products. Formaldehyde is used as an intermediate to produce resins such as urea formaldehyde resins which is extensively used in paint industry.

An aqueous solution of formaldehyde can be useful as a disinfectant as it kills most bacteria and fungi. Formaldehyde solutions are applied topically in medicine to dry the skin, such as in the treatment of warts. Many aquarists use formaldehyde as a treatment for the parasites.

Formaldehyde is used to inactivate bacterial products for toxoid vaccines. It is also used to kill unwanted viruses and bacteria that might contaminate the vaccine during production. This is not safe for long term use due to the carcinogenic effect. Some topical creams, cosmetics and personal hygiene products also contain derivatives of formaldehyde as the active ingredients that prevent the growth of potentially harmful bacteria.

Formaldehyde is employed as a mordant in textile manufacture during the dyeing and printing process to facilitate the bonding of color to the fabric cells. 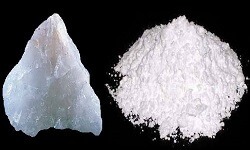